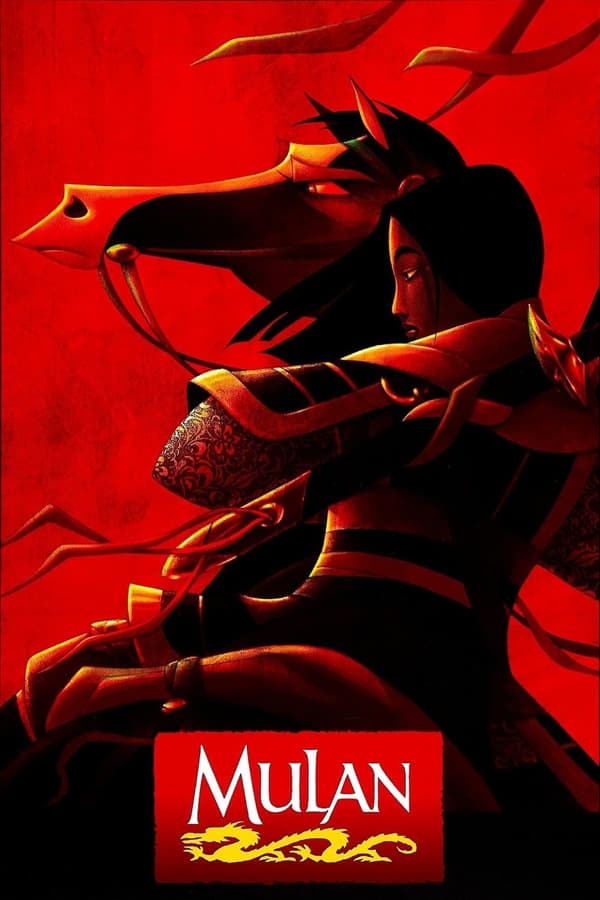 To save her father from certain death in the army, a young woman secretly enlists in his place and becomes one of China's greatest heroines in the process.

Mulan is a 1998 American animated musical adventure film produced by Walt Disney Feature Animation for Walt Disney Pictures. It is based on the Chinese legend of Hua Mulan, and was Disney's 36th animated feature, and the ninth animated film produced and released during the Disney Renaissance. It was directed by Barry Cook and Tony Bancroft, with story by Robert D. San Souci and screenplay by Rita Hsiao, Chris Sanders, Philip LaZebnik, Raymond Singer, and Eugenia Bostwick-Singer. Ming-Na Wen, Eddie Murphy, Miguel Ferrer, and BD Wong star in the English version, while Jackie Chan provided the voice of Captain Li Shang for the Chinese dubs of the film. The film's plot takes place in China during an unspecified Imperial dynasty, where Fa Mulan, daughter of aged warrior Fa Zhou, impersonates a man to take her father's place during a general conscription to counter a Hun invasion.

Mulan was the first of three features produced primarily at the Disney animation studio at Disney-MGM Studios (now Disney's Hollywood Studios) in Bay Lake, Florida. Development for the film began in 1994, when a number of artistic supervisors were sent to China to receive artistic and cultural inspiration. Mulan was well received by critics and the public who praised the animation, plot, characters (particularly the title character), and musical score, and grossed over $304 million. It earned a Golden Globe and Academy Award nomination and won several Annie Awards, including Best Animated Feature. It was then followed by a direct-to-video sequel, Mulan II in 2004. A live-action adaptation directed by Niki Caro was released on September 4, 2020.

One Hundred and One Dalmatians (1961)