Phantasmagoria: A Puzzle of Flesh 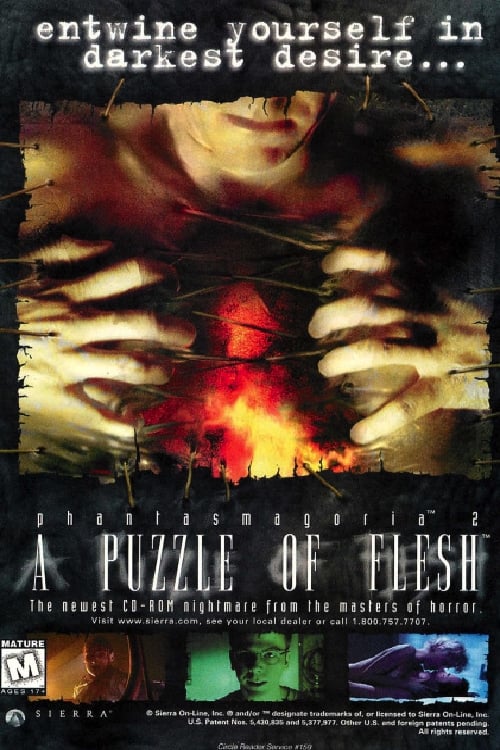 One of the most insane full motion video games from the 90's edited into one NINETY MINUTE MOVIE! Written and designed by horror writer Lorelei Shannon, Phantasmagoria 2: A PUZZLE OF FLESH is a narratively unrelated follow-up to the best-selling title by graphical adventure pioneer Roberta WIlliams (King's Quest). Notorious for its "obscene content" that saw the game heavily censored or outright banned in several countries, Puzzle of Flesh had the player help the introverted Curtis Craig navigate a psychological breakdown while working at a predictably sinister pharmaceutical company. Dark secrets, sexual exploration and inter-dimensional twists abound! Experience much of the game's craziest moments and outrageous gore condensed into a coherent*, freaky and funny narrative. *Well, as coherent as the actual plot of the game.

Phantasmagoria: A Puzzle of Flesh (also known as Phantasmagoria 2) is an interactive movie point-and-click adventure game released by Sierra On-Line. The game was released in North America on November 26, 1996. Though technically a sequel to Roberta Williams' 1995 game Phantasmagoria, Puzzle of Flesh shares no connections with its predecessor in plot nor characters, as Sierra initially intended the Phantasmagoria title to be a horror anthology, with each installment of a different story and style. While not a critical or commercial success, A Puzzle of Flesh, like its predecessor, is remembered for its controversial violent and sexual content, which led the game to be heavily censored or banned outright in several European and Oceanic countries.