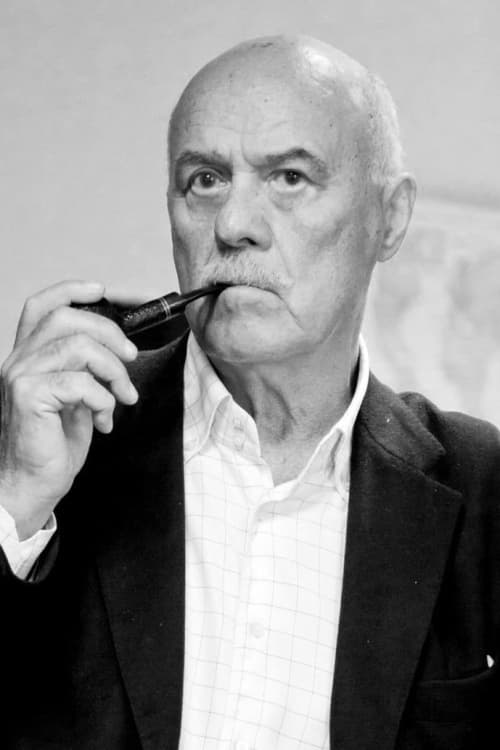 Stanislav Sergeyevich Govorukhin (Russian: Станислав Сергеевич Говорухин; 29 March 1936 – 14 June 2018) was a Soviet and Russian film director, actor, screenwriter, producer and politician. He was named People's Artist of Russia in 2006. His movies often featured detective or adventure plots. Govorukhin was born in Berezniki, Sverdlovsk Oblast (now Perm Krai). His parents divorced before he was born. His father Sergei Georgievich Govorukhin came from Russian Don Cossacks and was arrested as part of the decossackization genocide campaign started by Yakov Sverdlov. He had been exiled to Siberia where he died around 1938 at the age of 30. His mother Praskovya Afanasievna Glazkova was a tailor. She came from the Volga region, from a simple Russian family of a village school teacher. She raised Sergei and his sister Inessa by herself and died at the age of 53.Govorukhin started his career as a geologist in 1958. He then joined a television studio in Kazan and enrolled at the VGIK. During the Soviet period, Govorukhin became noted for his successful adaptations of adolescent classics, including Robinson Crusoe (1972), Adventures of Tom Sawyer (1981), In Search of the Castaways (1983) and Ten Little Niggers (an adaptation of Agatha Christie's original 1939 novel And Then There Were None) in 1987.Most of his Soviet movies were made at the Odessa Film Studio. He was good friends with Vladimir Vysotsky and directed three movies starring him – Vertical (1967), White Explosion (1969) and The Meeting Place Cannot Be Changed (1979), one of the cult films of the late Soviet era. Several other of his films feature Visotsky's songs written as part of the soundtrack.

Apart from directing, he also wrote screenplays (including the top-grossing Soviet action film Pirates of the 20th Century directed by his fellow student Boris Durov in 1979) and started in movies as an actor. Being a trained mountaineer, he usually performed all the stunts himself. He also dedicated several movies to mountaineering, most notably Vertical and White Explosion which became some of the first examples of this subgenre in the Soviet cinema.

During the perestroika Govorukhin became less active at film making and more active in politics. He became one of the leaders of the Democratic Party of Russia. In 1990 he directed a much-publicized documentary highly critical of the Soviet society entitled We Can't Live Like This (also translates as You Can't Live Like That or This Is No Way to Live). Although his feature films were previously ignored by the critical establishment, this film won him the Nika Award for Best Director. It was at that time that Govorukhin released an extensive interview with Aleksandr Solzhenitsyn.By the start of the 2000s he returned to cinema, co-starring with Alisa Freindlich in the detective TV series Female Logic and releasing another revenge movie, Voroshilov Sharpshooter (with Mikhail Ulyanov in the lead role). He directed a total of seven movies since then. In recent years he had been also actively working as a producer.

Govorukhin died on 14 June 2018 at the age of 82 following a long illness. He was buried at the Novodevichy Cemetery in Moscow.

A House ‎for Rent with All the Inconveniences‎ (2016)

Movie
The Earl of Dorincourt

The Rifleman of the Voroshilov Regiment (1999)

The Adventures of Tom Sawyer and Huckleberry Finn (1984)

The Meeting Place Cannot Be Changed (1979)

The Meeting Place Cannot Be Changed (1979)