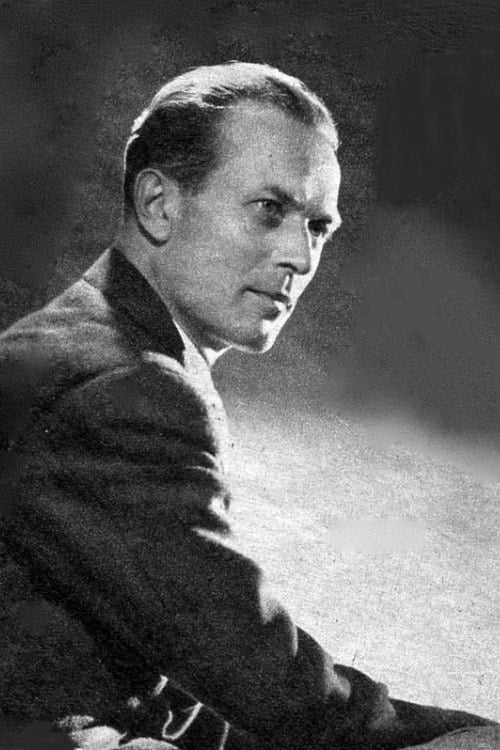 After the switch to sound film he was engaged by the German industry leader Universum Film AG (Ufa) as a film editor (cutter). Eduard von Borsody thereafter often worked under Ucicky's direction and edited for him, among many other films, the National Socialist propaganda films Morgenrot and Flüchtlinge. In 1937, after some experience as assistant director, also with Ucicky, and a series of short dramas, he directed his first film for Ufa: Brillanten ("Diamonds"). Kautschuk (1938), with René Deltgen and Gustav Diessl, was an adventure film about the real-life English explorer, Henry Wickham, who in 1876 smuggled rubber seeds to England in order to break Brazil's rubber monopoly. Sensationsprozeß Casilla (1939) was about a child abduction. With Kongo-Express (also in 1939) Borsody again shot an adventure film in a tropical setting in an attempt to capitalise on the success of Kautschuk. Willy Birgel, Marianne Hoppe and René Deltgen starred.Once World War II began, light cheerful escapist films were much in demand, and von Borsody was cinematographer for the romantic musical drama Wunschkonzert ("Request Concert"), one of the most successful films of the entire Nazi period. Ilse Werner plays a young Berliner, who patiently and trustingly awaits the return of the man to whom she is engaged, played by Carl Raddatz, ordered on a secret mission to Spain. The film was classified as "politically valuable", "artistically valuable", "valuable for the people". and "valuable for youth", and took 7.6 million Reichsmarks.

The science fiction film Weltraumschiff 18 (i.e. Spaceship 18), which he directed and had already begun filming had to be abandoned because of the outbreak of the war. Material was used in the short science-fiction movie, Weltraumschiff 1 startet (Spaceship 1 takes off). The last film Borsody shot before the end of the war, the Gottfried Keller adaptation Jugendliebe fell afoul of the film censors and did not open until 1947. After the end of the war Borsody had no trouble continuing his film career despite his previous involvement in propaganda films. After a number of Heimatfilme came his best-known post-war film, the romantic comedy of 1956 Dany, bitte schreiben Sie ("Dany, Please Write!"), with Sonja Ziemann and Rudolf Prack, and the smuggling film Liane, das Mädchen aus dem Urwald, with which he returned to the exotic. His next film, Skandal um Dodo (1958), was one of the first post-war films in German to star a black woman.His 1965 film Bergwind was entered into the 4th Moscow International Film Festival.