Up Your Teddy Bear 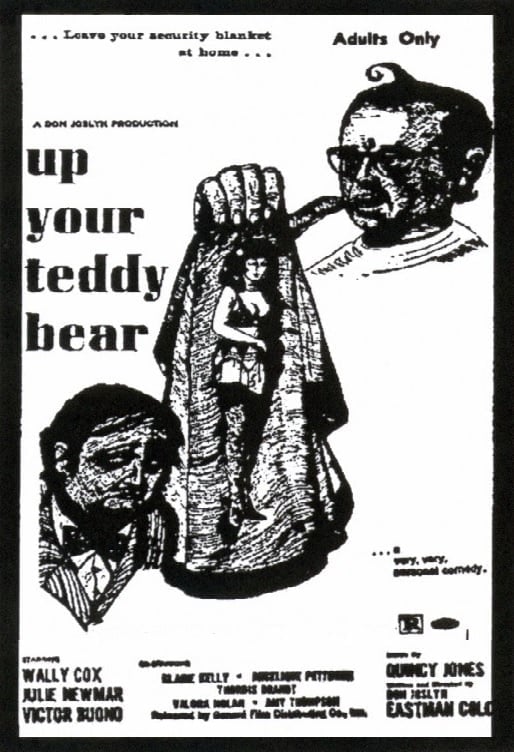 Clyde King, a toy store employee whose hobbies include making wooden toys and stalking women, is coveted by the female owner of one of the biggest toy companies in the world. She is enchanted by King's hand-carved toys, and she delegates the recruitment of the toy-maker to her second-in-command, Lyle "Skippy" Burns. However, King will not join her company as she reminds him of his mother. She becomes the subject of bizarre fantasies in which "Mother," the toy company owner as imagined by King, brow-beats and humiliates him. Discovering King's predeliction for leaving the toy store to stalk women, Skippy first tries to entice Clyde into signing an employemnt contract by supplying him with women, even going as far to dress himself up in drag as a prostitute. But every time he sets King up with a woman, the encounter ends disastrously, so Skippy finally decides to kill him.

Savanna Samson (born October 14, 1967) is the stage name of Natalie Oliveros, an American former pornographic actress. The winner of several AVN Awards, she has spent most of her career as a contract performer with major producer Vivid Entertainment, and is known for her roles in acclaimed adult films such as The New Devil in Miss Jones. In addition to performing, she has her own adult film studio, Savanna Samson Productions. A native of upstate New York, she entered the adult film industry in 2000, after working as a dancer at the Manhattan strip club, Scores.Samson has gained mainstream recognition with appearances on television shows such as Saturday Night Live, The Daily Show and 30 Rock. Her wide range of activities outside pornography include working as a sex-advice columnist, a radio presenter and a political correspondent. She also produces her own line of wines, has a recording contract with E1 Music and is a trained ballerina.