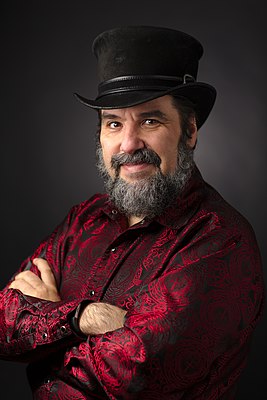 Jason Scott Sadofsky (born September 13, 1970), more commonly known as Jason Scott, is an American archivist, historian of technology, filmmaker, performer, and actor. Scott has been known by the online pseudonyms Sketch, SketchCow, The Slipped Disk, and textfiles. He has been called "the figurehead of the digital archiving world".He is the creator, owner and maintainer of textfiles.com, a web site which archives files from historic bulletin board systems. He is the creator of a 2005 documentary film about BBSes,

BBS: The Documentary, and a 2010 documentary film about interactive fiction, GET LAMP.Scott lives in Hopewell Junction, New York. He was the co-owner of the late Twitter celebrity cat Sockington. He works for the Internet Archive and has given numerous presentations at technology related conferences on the topics of digital history, software, and website preservation.

Going Cardboard: A Board Game Documentary (2012)