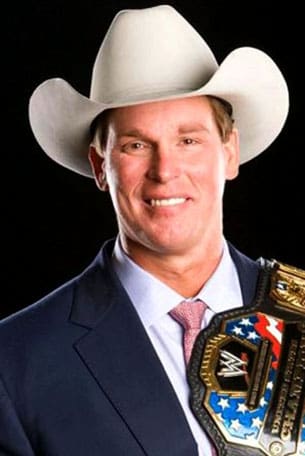 John Charles Layfield (born November 29, 1966), better known by the ring name John "Bradshaw" Layfield (abbreviated to JBL), is an American retired professional wrestler and football player. He is currently signed to WWE, where he performs on the Raw brand as the manager of Baron Corbin. Layfield is currently a financial commentator and is featured regularly on Fox News Channel and Fox Business Network. He is also employed by Northeast Securities as its senior vice president.Layfield rose to prominence in WWE (then the World Wrestling Federation, WWF) during its Attitude Era under the ring name Bradshaw, during which time he became a three-time WWF Tag Team Champion with Ron "Faarooq" Simmons as part of the Acolytes Protection Agency (APA), a feared pair of strong and tough mercenaries who, aside from occasionally wrestling and doing “work” for “clients” spent most of their time sitting around in their “office” playing cards, drinking beer, fighting people backstage and then going out to bars and getting into bar fights. In 2004, Simmons retired and the APA separated, and Layfield was rebranded as the heel character JBL— a rough-mannered, brawling, blustering, bad-tempered and bigmouthed Texas elite

businessman, driven into the arena by limousine. The gimmick was built off of Layfield's real-life accomplishments as a stock market investor. Later that year, he captured the WWE Championship and held it for 280 days. A month before his in-ring retirement at 2009's WrestleMania 25, he became Intercontinental Champion, which made him the 20th Triple Crown Champion and the 10th Grand Slam Champion in WWE history.

After his retirement, Layfield became an on-air commentator for WWE programming. Layfield was inducted into the 2021 WWE Hall of Fame as a member of the Class of 2020.

Movie
Self - WWE Hall of Famer

The History of The WWE Hardcore Championship (2016)

Straight Outta Dudleyville: The Legacy of the Dudley Boyz (2016)

WWE: Satan's Prison - The Anthology of the Elimination Chamber (2010)